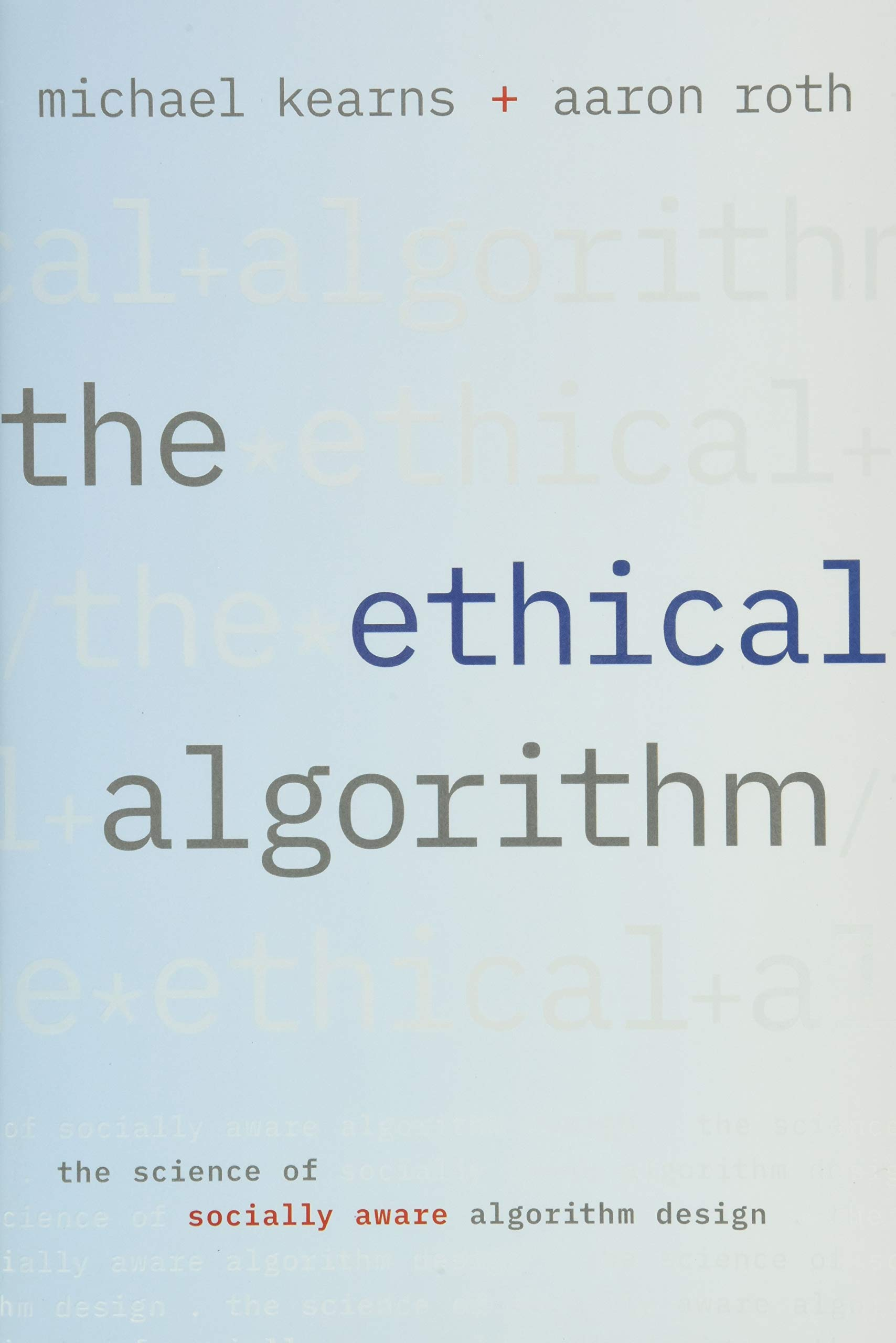 The Ethical Algorithm by Michael Kearns and Aaron Roth is a thought-provoking book that touches upon how algorithms are shaping society. I expected it to be a bit like Netflix's The Social Dilemma, that is, a giant red flag of how the age of algorithms is ruining society. Instead, I got a forward thinking book that's full of practical ideas, many that can be (and are) applied right now. Refreshingly, the explanations are crisp, and the authors don't assume prior knowledge in either computer science, statistics or ethics. It's definitely worth reading to help understand the technological crossroads our society is in.
The author is quite open about how this area is still nascent. Many of the challenges we face remain unanswered. Despite that, I came away with the hope that algorithms don't just need "fixing" to be more ethical. We can use algorithms to actively create more ethical outcomes, and in turn a fairer and happier society.
And I have to say, the blend of computer science, statistics, game theory and ethics made for an enjoyable read. I shall give a summary of some of the ideas that I found interesting.
Algorithmic Anxiety
Data is a double-edged sword—we are able to get great insights to understand how society works, and improve public health, municipal services and consumer products. At the same time, we are the data, and that means all these services tracking things about you can be corroborated to identify you (more on this to come). The authors cite an example, where The New York Times managed to identify Lisa Magrin, a forty year old math teacher, based on publicly available commercial datasets, just by tracking movements of people. Other things they found out, just by seeing her movements, were that she visited a weight loss center, a dermatologist, and other details that should not be public knowledge.
It's not just privacy that we have to worry about—algorithms are increasingly used to make more important decisions, beyond recommending things to buy or filling up your social media feed. They are being deployed for automating credit card and loan applications, criminal sentencing decisions and hiring. The authors say that there is no going back technologically here, and we need to instead actively encode ethical principles directly into these algorithms. As skeptical as I was when I read this, I have to say, the ideas are actually pretty solid and sensible.
It also made me realize that the authoritarian algorithmic dystopia described by Yuval Noah Harari in "21 Lessons for the 21st Century" is not as inevitable as he made it sound.
The authors also mention the problem with Machine Learning, mainly the fact that they are meta-algorithms. We know quite clearly how to create models, but often we have no understanding of the models that are produced. They are the result of us optimizing an objective function, and we cannot know of the unintended side effects. For example, we might encode sexism into our hiring decision model, because the model was trained on historical data, and hiring has typically been quite sexist. Alternatively, it may be that the most accurate model may not be the fairest or the most privacy respecting. So we need to avoid getting monkey paw'd by explicitly encoding other ethical criteria for training models.
"Anonymized data isn't"
Anonymous data is usually not anonymous in practice. The authors give a couple of examples of this. We can take "anonymized" data, that is, datasets with the names redacted or pincodes partially obscured, and compare with other publicly available data (since there is so much of it) and use that to get all the information. Here's an excerpt:

Latanya Sweeney, who was a PhD student at MIT at the time, was skeptical. To make her point, she set out to find William Weld’s medical records from the “anonymous” data release. She spent $20 to purchase the voter rolls for the city of Cambridge, Massachusetts, where she knew that the governor lived. This dataset contained (among other things) the name, address, zip code, birthdate, and sex of every Cambridge voter—including William Weld’s. Once she had this information, the rest was easy. As it turned out, only six people in Cambridge shared the governor’s birthday. Of these six, three were men. And of these three, only one lived in the governor’s zip code. So the “anonymized” record corresponding to William Weld’s combination of birthdate, sex, and zip code was unique: Sweeney had identified the governor’s medical records. She sent them to his office.